It’s hard to find a Keralite who hasn’t tasted Porotta in his/her lifetime. Prepared out of Maida/ white flour, Porotta leads the appetite of an average Malayali. In-spite of several restrictions, Poratta continues its unaltered prominence in our plates.

What exactly is Maida? 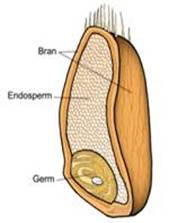 Maida is prepared from Endosperm and it is devoid of the edible part (Bran & Germ)of wheat grain. The endosperm part is milled, refined & bleached and passed through fine mess to obtain soft, white powder. The refining and bleaching process induce many toxic chemicals in Maida. The bleaching process removes inherent yellow colour and destroys nutrients and fibres of the wheat. Benzyl peroxide & Alloxane are used as bleaching and softening agents in Maida respectively.

Benzyl Peroxide, which is otherwise used in hair dyes and as tooth whitener is used in the refining process of  Maida, which makes it more toxic than of any good. Studies have already reveals that this chemical is carcinogenic and skin irritant.

Alloxan is a toxic agent usually used to induce diabetes in experimental rats for insulin testing. It destroys the insulin production cells in pancreas.

Maida has high glycemic index which is digested easily and releases sugar into the blood streams. To  counteract the alleviated sugar level pancreas has to overwork to release sufficient insulin in the blood stream. Regular consumption lowers the insulin production and eventually leads to Type-2 diabetes.

The glucose wandering in the blood will get attached to proteins causing inflammation in the body and leads to Arthritis, High BP etc .

As Maida lacks fibres it act as glue in intestine. As a result, it slows down digestion and metabolism process which may results in weight gain, stress, head ache and migraines.

During refining process all the nutrients are removed which give an acidic nature to the product resulting in calcium loss from the bones leading low bone density.

To stay Healthy it is advisable to refrain ourselves  from the  frequent consumption of  Maida .